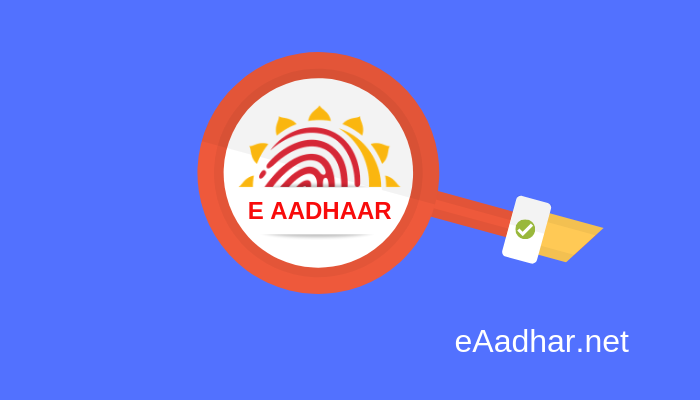 If you are looking for Aadhar Card Status and Eaadhar download process then you are at right page.

Aadhaar Card is very important today in India. It has become one of the most crucial documents in the nation. Every other important document of an individual is interlinked with the aadhar now.

Important Update : How to link Aadhar Card to PAN Card?

eAadhar is just Electronic Copy of Aadhar Card or you can say eAadhar is Digital copy of Aadhar Card in PDF format. Don’t forget that eAadhaar has the same value as equal as Original Aadhaar Card. Also, having e-Aadhaar card keeps your Aadhar information handy and minimise the chances of you ever losing or forgetting your Aadhar number.

It is very common to find errors in Aadhaar cards like wrong Name, wrong address etc. The mistake might be due to a clerical error on the part of the operator due to heavy load of Aadhaar Card Application or you unwillingly providing incorrect information. In this scenario, you must update your Aadhar information as soon as possible.

After Aadhar application you have two option. First is to wait for Physical copy of Aadhar Card delivered by Post and second is to Download eAadhar card online. UIDAI (Unique Identification Authority of India) is providing a great feature of downloading Aadhar Card Digital Copy which is called E Aadhar Card.

But, you can only Download E Aadhar after successfully verification of your Aadhar Application. So, you have to check Aadhar Status time to time. When your Aadhar Status Update completed you can download eAadhar by following below mentioned simple steps. Before that you have to be in possession of your Mobile Phone to receive One Time Password (OTP) for Verification Purpose.

Note: You will get E-aadhar OTP only on your Registered Mobile Number, Which one you have Provided at the Time of Aadhar Card Application Process.

First of all you have to apply for Aadhar Card at your nearest Aadhar Card Center with relevant documents i.e. Passport Size Photo, Address Proof & ID Proof. Aadhar Enrolment Process take just few minutes and you will get a Enrolment receipt containing your Unique Enrolment ID. After that, it will take approximately 90 Days to receive Original Aadhar Card at home by Post.

For an instance we suppose that after downloading your E Aadhar from above mentioned method and you get to know that some of your information is wrongly filled up during Aadhar Card Application. Now in this scenario, you need to Update your Aadhar Card at SSUP (Self-service update Portal). You may need to attach some more documents for Verification. Now, I will explain the full process of Aadhar Correction.

For updating your Aadhar Card at SSUP you can choose between below mentioned 2 options.

The Process of Online Aadhar Correction is very Simple and Fast. Just follow the below given steps:

As you’ve updated your Aadhar Card by following above mentioned steps now you can track New Aadhar Card Status with the Help of URN Number. The tracking process is very simple and will take less than 5 minutes.

Now here you may get two Possibilities

1. Your Aadhar Card has been Updated (You can download straight away by follwong instructions given in below image).

2. Your Aadhar Update is Awaiting Approval (You have to wait for few more days & check again).

If, Your Aadhar Update Application is verified you will receive your new Aadhar Card within couple of weeks meanwhile you can also Download Eaadhar using above mentioned method.

1. How long is the Aadhaar card valid?

The Aadhaar card is valid for life.

2. Are e-Aadhaar and the Aadhaar card the same thing?

Yes, Aadhaar card and e-Aadhaar are same. The only difference being the Aadhaar card is a document sent to the applicant through the post by UIDAI while the e-Aadhaar is a digital version that can be downloaded from the UIDAI website.

3. My first Aadhaar application was rejected, can I re-apply?

Usually an Aadhaar application is rejected due to technical/quality reasons. You are permitted to reapply for your Aadhaar.

I hope you are able to Download E aadhar Card and Update Aadhar Card using Above described methods. But If you are still facing any Problem, Please Comment Down below and I will try to Solve your Problems.

This site uses Akismet to reduce spam. Learn how your comment data is processed.